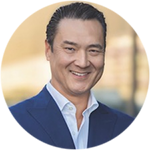 Darren Sugiyama was born and raised in Long Beach, California and received a Bachelor’s Degree from Loyola Marymount University where he was also the team captain and 2nd Team All-Conference baseball player. He continued his education and earned a Master’s Degree in Multicultural Education from the University of Hawaii at Manoa.

After starting his career as a counselor in a gang prevention program in his hometown of Long Beach, California, worked as a teacher in the public school system in Honolulu, Hawaii, and as a counselor in Halawa Prison and the Honolulu Detention Home.

Darren decided to follow his entrepreneurial dreams and started his own employee benefits firm in 2003 called Apex. During his first year in the insurance business, his personal income for the year was only $277 (he proudly displays his personal tax return on the wall of his office). But just seven years later, Apex was producing over $37 million in annual sales and was the #1 producing firm in the country for three different insurance carriers concurrently.

In addition, Darren founded Lionsmark Capital in 2016 which is now one of the most dominant premium financing intermediary firms in the life insurance industry, and in 2020, he co-founded the revolutionary fintech firm Breadbox which offers proprietary solutions to investment advisors and life insurance advisors across the country.

Darren is also an internationally acclaimed 8-time author with published works being distributed in over 15 countries. As a nationally acclaimed motivational speaker, business coach, and mentor, Darren does both live and virtual motivational speaking events, as well as private coaching sessions, teaching others how he built his businesses using extremely unorthodox methods.